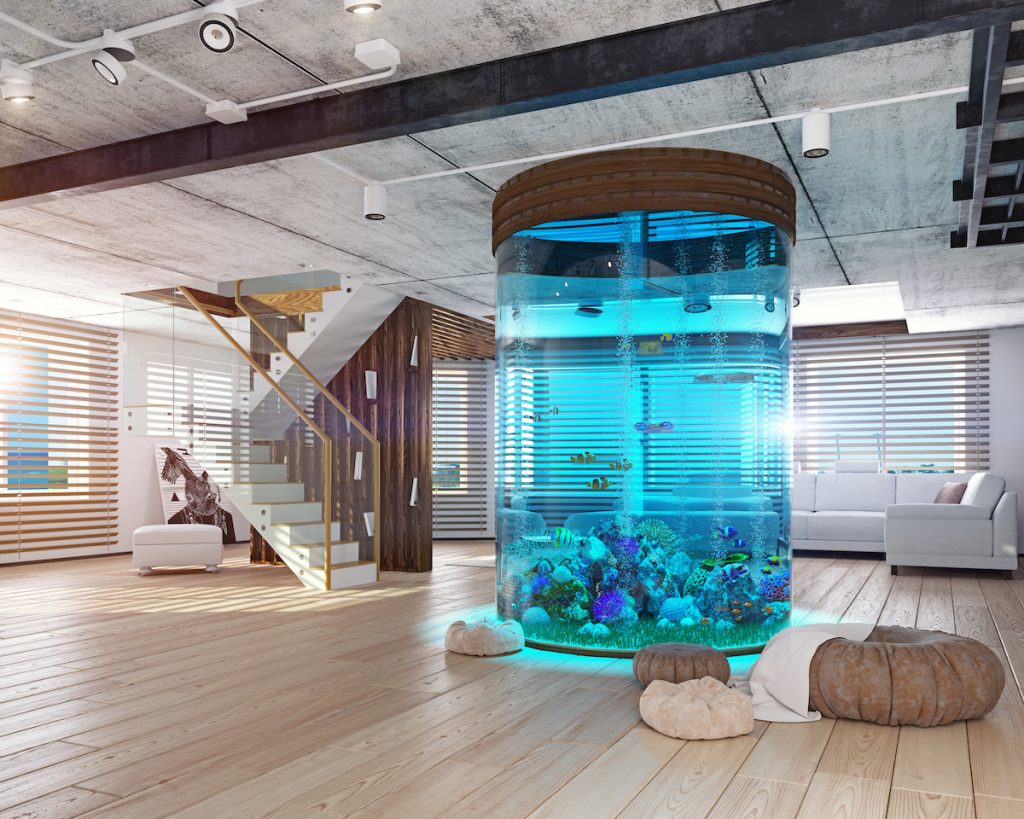 The mysteries of the oceans are elusive and enigmatic. For most of us, the worlds that lie beneath are only accessible via textbooks, well-produced documentaries, artwork, Discovery Channels Shark Week, SpongeBob Squarepants, and perhaps the occasional snorkeling and scuba diving vacation. Perhaps the origin of human life and the home to bizarre and extraordinary creatures, the oceans continue to be a place that drives human imagination. The mysteries of the ocean continue to spark the interest of millions of people across the globe, and it is partly why aquariums are beloved. Public aquariums have seen quite a resurgence in recent years and the success of shows like Tanked brought to the public spotlight the industry of commercial and home aquariums, along with the enigmatic beauty of sea life.

Here at Dorian Construction, we venture into more than just the landscaping possibilities of custom swimming pools, laguna pools, ponds, and backyard waterfalls. We too have ventured deep into the ocean depths and worked to build custom aquariums for people in El Paso. Our founder Miguel Angel Mercado learned from the best, Wayde King, about the construction of custom aquariums and began his journey into the wonderful world of underwater creations.

It is perhaps, humans innate attraction to the strange creatures of the ocean that makes aquariums a stellar way to inject life and enhance any spacewhether in a home, office, commercial space, or school. One study conducted in Europe looked at how the interaction between humans and natural aquatic environments had an effect on peoples mental and emotional state. The study had some controlled variables that included the number of fish people interacted within the aquarium, as well as the number of species. They then monitored some vital signs including heart rate, blood pressure and changes in mood in ten minute periods. The study seemed to suggest that with more biodiversity, people felt more relaxed and at ease.

A Short History of Public Aquariums

The earliest public aquariums in the United States had a very similar effect on people. At first, tanks were populated with relatively mundane species. They began as traveling fishery exhibits and even then were caused quite the stir. The 1904 St. Louis World Fair contained some of the first tank displays of this kind. When Pennsylvania fashioned a beautiful grotto, (think cave-like structure) they filled it with catfish, trout, and more, many people were drawn to the exhibit, even after the fish started dying from too much lime and aluminium in the water.

Even in these early aquariums, visitors seemed to be enthralled with a sense of wonderment and curiosity. Where else could you get a glimpse of the world that thrived underwater? It was an early indicator that the mysterious oceans awoke something in people. Some of the early public aquariums included Woods Hole Science Aquarium, New York Aquarium, Detroits Belle Isle Aquarium, and Belle Isle Aquarium in Detroit. One problem in these early aquatic worlds was the lack of knowledge on how to properly maintain one. Many of the fish died and others appeared sick and out of it.

As it turns out, holding aquatic creatures takes a little bit of knowledge and understanding of how these sea creatures live and what they need to survive. Simply taking rare aquatic species from their ecosystem has an impact on the environment and people are far more aware of this today.

The early aquariums hardly bothered about the impact that collecting the species had on ecosystems and species count. Its why many early aquariums continued their collecting of porpoises, seals, and sea lions without bothering about what that was doing to the local environment. It wasnt long, however, that the aquarium was seen as an opportunity to conserve wildlife and protect them from extinction, as it happened with the Galapagos tortoises. Collected Galapagos tortoises mated successfully in captivity a few years ago. They were then later released back into their natural habitat. For years now, aquariums across the country have been used in conservation efforts and educational programs for people looking to study the underwater world. At the same time, custom aquariums in private residences and commercial buildings have also skyrocketed, as people discover the transformative power of an aquarium.

The Wonders of Aquarium Glass

There are special components that go into making an aquarium, such as the ones that we build here at Ocean Gallery USA. One of those special components is the glass that is used. From smaller custom aquariums to large exhibits, the glass is what brings the aquarium to life. Its also the very important barrier between you and that shark, so you want to make sure itll hold up. So how does glass sustain such weight and pressure?

Take, for example, a large public aquarium in Okinawa, Japan, which contains 7.5 million liters or 7,500 tonnes of water. Glass as we often think about it might not be suitable for this type of heavy-duty job. It needs to be thick in order to withstand that weight. Its why most aquariums use polymethylmethacrylate (PMMA) or known as acrylic. It is half the density of glass and has twice the tensile strength.

Infuse Any Space With Aquatic Serenity and Beauty

What does a custom aquarium do for your office space or home? It does more than occupy space. It is not merely decorative, but it breathes a kind of life that is not possible with anything else.

Dorian Construction and Ocean Gallery USA aquariums are built with high-quality materials and adhere to strict standards of excellence. Our designs are one-of-a-kind, inspired by your unique space and vision. All of our fabricators, designer, and artisans are highly skilled and trained in the process: from design to manufacture and installation.

Let's Get to Work!